An abandoned young woman, Kanako, with no aim in life has the bad luck of becoming a waitress in a restaurant for assassins (because it ran out of waitresses who were killed for various service-related mistakes). This is based on a book and possibly the manga adaptation.

A kooky but mostly derivative movie. While it looks nice and has some stylized combat there are signs of a low budget here. The first sign is that the majority of the movie takes place in a single location, which is the restaurant. It is seen mostly empty with only Kanako & her harsh boss and head chef, Bombero. Despite there being multiple gang bosses, you only actually see the gang of one of the bosses. Two appear to have nobody and one only seems to have the one assassin. Because of this, the world of movie feels very small.

END_OF_DOCUMENT_TOKEN_TO_BE_REPLACED

A man with a disturbing childhood memory of an unseen monster puts it behind him and grows up to become a seemingly well-adjusted man. He gets married and eventually has a child. But this is when strange things begin to happen again and he begins to believe the monster from his childhood is now after his family. He enlists the help of a couple of people who are familiar with the occult but it seems nobody can be trusted.

It’s best to not know anything before going into this horror movie. It’s quite bombastic at times and unlike some Japanese horror, it is quite the opposite of a slow burn. One thing that some may not like is that there’s a lack of build-up or suspense. It’s not really a jump scare type of horror but there are gory moments and graphic scenes that feel like more of a quick gut punch that you don’t expect. Brief bits of sensory overload before going back to the more grounded questions that center on family and kids that almost every character struggles with in their own way. The story actually spends a fair bit of time on these themes which ties into the horror aspect.

END_OF_DOCUMENT_TOKEN_TO_BE_REPLACED

Based on the book of the same name by Kevin Kwan (who has subsequently written two more books that form a trilogy), the movie follows Rachel, a Chinese American professor who goes to Singapore with her boyfriend Nick who she quickly discovers is part of one of the richest families in Singapore. She has to deal with judgmental rich people and of course Nick’s unimpressed mother.

The actresses and female roles are almost all really good some of which in some way almost steal the spotlight away from the lead, Constance Wu. But let’s talk about her as Rachel first. She does a good job and her character arc actually goes in unexpected directions. The conflict between tradition and modern attitudes has a bit of a different twist here as socio-economic classes also comes into play. It informs and affects the romantic conflicts but doesn’t overwhelm the main story. Wu handles both the comedy and serious scenes in convincing fashion.

END_OF_DOCUMENT_TOKEN_TO_BE_REPLACED

Mini reviews of the rest of the Fantasia films that I watched in 2018.

END_OF_DOCUMENT_TOKEN_TO_BE_REPLACED

Adpated from a book, a 4th grade boy has a crush on an older woman who works at the dentist’s office that he goes to but that’s not the only thing on his mind. When penguins start appearing in his town, he decides to investigate with his best friend.

This film exhibits one of the great things that make animation a special medium. There are simply things you can draw that you couldn’t possibly replicate in real life or even with the aid of photo-realistic computer graphics. That sort of imagination and creativity are on display in this film.

END_OF_DOCUMENT_TOKEN_TO_BE_REPLACED

Adapted from the novel of the same name, a young man can no longer keep his cat and visits a series of friends in order to find a place of his cat to live. The cat is not particularly happy about this and we hear his thoughts during his owner’s travels.

This is a tearjerker and one that does it well even when you see the sadness coming a mile away. It uses various tropes that I won’t reveal but anyone familiar with the genre will probably spot them. As expected the story is fairly episodic as the young man, Satoru (Sota Fukushi) visits each friend and then flashbacks occur showing his past with said friend. His final visit is to his aunt and the crying definitely get dialed up a notch.

END_OF_DOCUMENT_TOKEN_TO_BE_REPLACED

This romantic comedy focuses on a young, introverted adult woman who has harbored a 10 year crush on classmate she barely talked to back in her high school days. Despite her lack of social skills, she manages to build up the courage to find and pursue him while she is in turn pursued by an awkward coworker who has a crush on her.

Adapted from a novel (same name as the Japanese movie title) by Risa Wataya, this is the romcom for the invisible introvert. It is shown from the viewpoint of a young adult woman, Yoshika, (Mayu Matsuoka) who goes through a kaleidoscope of emotions throughout the story as she pursues her first and only love, Ichi (Takumi Kitamura), the name of the character but also meaning the number one in Japanese. She herself is also being pursued by a coworker that she refers to as Ni (Daichi Watanabe), the Japanese word meaning the number two. This number one and number two comes up again later on the phone in a humorous moment. The film has a fair number of funny bits sprinkled which build upon previous moments throughout its running time.

END_OF_DOCUMENT_TOKEN_TO_BE_REPLACED 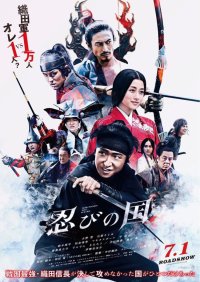 Review: I’ve liked a lot of the films by this director as he’s often managed to successfully combine serious moments with comedy. This movie is mainly a historical action comedy that falls in the Jidaigeki genre. Mumon is the best ninja in a region called Iga where ninja clans reside. Mumon (Satoshi Ohno, leader of super popular boy band Arashi) like many of his fellow ninjas only fights if the price is right. In one battle, Mumon kills a ninja of a rival clan for a reward. The dead ninja’s brother, Heibi (Ryohei Suzuki), is deeply saddened and seeks revenge only to be met with indifference by his clan’s leader and the rest of the clan. This leads to a chain of events that culminate in a battle between the ninjas of Iga and the armies of Nobukatsu Oda (Yuri Chinen), the second son of Nobunaga Oda.