Another edition of Nouveau cinema is fast approaching and runs from October 9-20, 2019 in various cinemas such as Cinema du Parc, Cinematheque quebecoise, Cinema du musee, and Cineplex quartier latin. A listing of screenings of notable East Asian films will be followed by trailers.

Quebec based director Ky Nam Le Duc will have the world premier of his movie, “Canada”,  and he along with the cast will be in attendance for a Q&A.

Nouveau cinema also has augmented reality or virtual reality works and one intriguing one is “East of the Rockies”, an interactive narrative written by author Joy Kogawa.

There will be three screenings Chinese movie “So Long, My Son” directed by Wang XiaoShuai, an award winning director who is part of the sixth generation of Chinese directors.

Fans of old school martial arts will certainly want to see the restorations of two films by legendary wuxia director King Hu that will be screening, “The Fate of Lee Khan” (1973) and “Raining in the Mountain” (1979). The latter is a North American premiere of a brand new restored version.

Japan as usual has many entries in this festival such as the world premiere of “Videophobia” directed by Daisuke Miyazaki whom along with actress Tomona Hirota will be in attendance. “Diner” is directed by Mika Ninagawa stars Tatsuya Fujiwara and Tina Tamashiro. “They Say Nothing Stays the Same” is the first film by well known actor Jo Odagiri and makes its North American premiere. “To the Ends of the Earth” is directed by award winning Kiyoshi Kurosawa and stars Atsuko Maeda. “37 Seconds” is the first film directed by Hikari.

There are also two animated features from Japan. “Pom Poko” is a lesser known Ghibli classic directed by Isao Takahata. “Children of the Sea” is a recent movie directed by Ayumu Watanabe.

Update Oct 10: A surprise announcement was just made and “Parasite” directed by Bong Joon Ho will have a screening.

END_OF_DOCUMENT_TOKEN_TO_BE_REPLACED 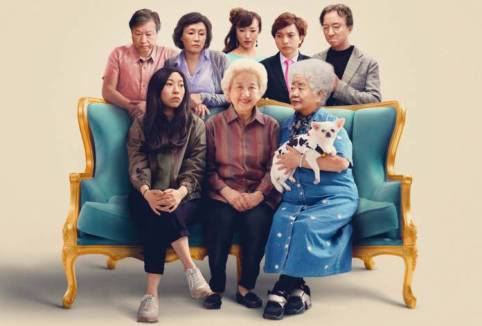 The new movie, “The Farewell”, starring Awkwafina (rapper and now actor in movies like “Crazy Rich Asians” and “Ocean’s 8”) is now in theaters at Cineplex Forum and at Cinema du Parc (with French subtitles under the French title “Le Mariage d’Adieu” / The Farewell Marriage) in Montreal. It’s directed by Lulu Wang and other cast members include Zhao Shuzhen, Tzi Ma and Diana Lin.

END_OF_DOCUMENT_TOKEN_TO_BE_REPLACED

Another edition of the Fantasia festival will start very soon. The full schedule is available on their website.

For the 2nd/final wave announcement of films see the following Fantasia press release.

Here are some of the East Asian films announced.

END_OF_DOCUMENT_TOKEN_TO_BE_REPLACED

Fantasia International Film Festival just announced their first wave of films. Here’s a list of the East Asian movies. Trailers will be below the list.

Idol
The Gangster, the Cop, the Devil
Door Lock
Chiwawa
House of Hummingbird
We Are Little Zombies
Ode to Nothing
No Mercy
The Fable
She
21st Century Girl
Fly Me  to Saitama
G Affairs
The Island of Cats
The Moon in the Hidden Woods
White Snake

To see the full list check out the press release below.

END_OF_DOCUMENT_TOKEN_TO_BE_REPLACED

There are some documentaries from China and Japan in this year’s edition of RIDM (Montreal International Documentary Festival). It has screenings from November 8-18, 2018 mainly at Cineplex odeon quartier latin, Cinema du parc and Cinematheque quebecoise.

There are several Japanese documentaries screening from Kazuhiro Soda (a director based in New York City). There’s one Danish documentary appropriately titled “Dreaming Murakami” about the Danish translator of Haruki Murakami’s books.

“A Little Wisdom” by Kang YuQi follows boys being raised in a monastery in Nepal. There is also “Self-Portrait: Sphinx in 47 KM” by Zhang MengQi.

This year’s Festival du nouveau cinema screens many intriguing films from around the world from October 3-14, 2018 at Cineplex Quartier Latin, Cinema du Parc and Imperial cinema. There is as usual a great selection of East Asian films. I won’t list them all but I will mention some of the ones I look forward to seeing the most.

Films from China have often been lacking at festivals (perhaps in part due to censorship) but this edition features Jia ZhangKe’s latest film, Ash is the Purest White starring his wife and muse Zhao Tao and Liao Fan, an actor’s who’s been in many good films that I’ve enjoyed. Other actors in the film include Feng Xiaogang and Xu Zheng which make up an impressive cast. Long Day’s Journey into the Night directed by Bi Gan stars Huang Jue and the ever compelling and beautiful actress Tang Wei.

From Japan, the festval brings Hirokazu Koreeda’s latest work Shoplifters, which won the Palme d’Or at Cannes. It has an excellent cast including Lily Franky, Sakura Ando, Mayu Matsuoka, and Kirin Kiki (her last film before she passed away in 2018). I’m biased since I’ve enjoyed many films by this director but I think this is a must-watch. Killing directed Shinya Tsukamoto stars Sosuke Ikematsu and Yu Aoi, both very good actors. Mamoru Hosoda’s latest animated film Mirai looks delightful for kids and adults. I’ve enjoyed past anime films by this director. There are also restored versions of older Japanese films from 60s, 70s & 80s which should intrigue those with a longer history of Japanese film viewing than myself.

The South Korea film I’m eager to see is Burning by Lee Chang Dong, whose previous film I saw was very engaging and thought provoking. This one stars Yoo Ah-in, Steven Yeun, and Jeon Jong-seo.

From France, there’s the animated film Funan directed by Denis Do about the Khmer Rouge in Cambodia. It won the Crystal Prize for Best Feature Film at Annecy International Animated Festival.

There are also other films from South East Asian countries such as Thailand, Philippines, Indonesia and Singapore.

Trailers after the jump.

END_OF_DOCUMENT_TOKEN_TO_BE_REPLACED

Fantasia International Film Festival has just announced the remaining films and the full screening schedule is now posted on their website. The entries in East Asian cinema continue to be intriguing. This year’s festival runs from July 12 to August 2, 2018. Its screenings take place at Concordia University’s downtown campus.

Donnie Yen’s new movie Big Brother directed by Ka-Wai Kam (he worked on the Ip Man films with Yen) will have its world premiere at Fantasia. Yen produces, stars and is also the action director and collaborated with action choreographer Kenji Tanigaki whom he had worked with previously on movies such as Special ID and Dragon. Tanigaki was the action director on the Rurouni Kenshin films.

From Korea, comes the Microhabitat, a first feature by Jeon Go-woon.

From China, comes Da Hu Fa directed by Busifan, the rare animated film from the mainland that will be shown in 3D and looks to be a unique entry to the genre.

Back to Japan, we have more North American premieres. Kasane directed by Yuichi Sato (who also directed Poison Berry in My Brain) stars Kyoko Yoshine, Tao Tsuchiya and Tadanobu Asano in a films where two actresses swap faces. Tornado Girl is a romcom directed by Hitoshi One and starring Satoshi Tsumabuki and Kiko Mizuhara.

Bodied directed by Joseph Kahn is about a grad student who becomes battle rapper. Dumbfoundead is one of his first opponents.

More East Asian films and films from other countries are mentioned in the full press release which you can find on ScreenAnarchy.

Trailers after the jump.

END_OF_DOCUMENT_TOKEN_TO_BE_REPLACED

Montreal-based film production company GreenGround has a feature at the festival with two screenings, one with English subtitles (Nov 16) and one with French subtitles (Nov 12). It is called Taming the Horse, directed by Gu Tao. The director visits an old childhood friend in China who has become embittered by his life.

Antoine, directed by Laura Bari is a documentary from 2008 about a blind child name Antoine who lives in Montreal.