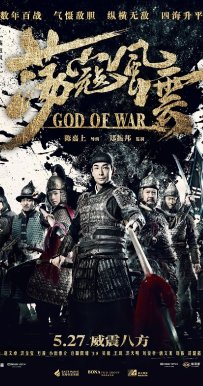 Review: Considering the generic sounding title, I hadn’t done much research on this movie and didn’t have any expectations. I wouldn’t even have seen if it weren’t for the fact it was between two movies I had planned to see. The film is a historical war movie that takes place during the Ming dynasty. It centers on a general named Qi Jiguang (Vincent Zhao) who’s tasked to defeat Japanese pirates after his predecessor commander Yu (Sammo Hung) fails to do so for months.

The main characters are actually multi-faceted in this movie. Qi is portrayed as smart and a good strategist but someone who isn’t good with politics. Even on the battlefield he is not infallible as there is a close call in his first battle when victory seems assured. Qi’s wife (Regina Wan Qian) is also a strong character and the catalyst for some surprisingly funny scenes, which lightens up an otherwise mostly grim war movie. It’s super funny seeing Qi and all the other men for that matter cower before Qi’s wife when she is angry. The leaders of the Japanese pirates also get screen time too and aren’t just portrayed as totally evil, which is actually a surprise considering past Chinese made films with Japanese villains. We get to see both sides strategize and we see these strategies implemented in battle, which can and do go back and forth.

Technically the film is excellent. Costume design looks pretty realistic but is colorful without being garish and downright embarrassing like some previous war epics. Various weapons and tools are also used. The fight scenes are suitably chaotic with many soldiers stabbing and slashing each other. But the general squad tactics used are always pretty clear. There are also some one on one fights and the final one between Qi and general Kumasawa (Yasuaki Kurata, who is a famous Japanese martial artist who fought Jet Li in Fist of Legend) is exceptional. There is also a fight early on between Vincent Zhao and Sammo Hung (apparently the first time they’ve ever fought on screen together according to this other review). Recommended, especially for fans of the genre.

Seen in the theater at Fantasia film festival.

Longtime fan and reviewer of East Asian films. Formerly a short segment on the music radio show / podcast "Beats From The East" on Concordia University's CJLO 1690AM radio station in Montreal, Quebec, Canada. View All Posts